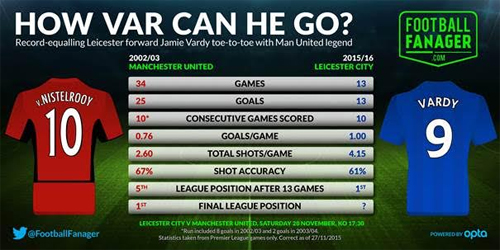 The above infographic from leading daily fantasy sports site Football Fanager shows that the Foxes striker is currently riding even higher than the record-breaking form of the Red Devils legend.

Vardy’s goal against Newcastle United last weekend was his 10th in a row, putting him level with the mark Van Nistelrooy set in the 2002/03 campaign.

Comparing the form of the Dutchman from 12 years ago, when his goals propelled Manchester United to the Premier League title, Vardy boasts a better goals per game ratio, is taking more shots per game and also rivals Van Nistelrooy’s impressive 67% shot accuracy figures.

At this stage in 2002/03, United were down in fifth position. With the Foxes currently sitting pretty at the top of the league, could this actually be their year?