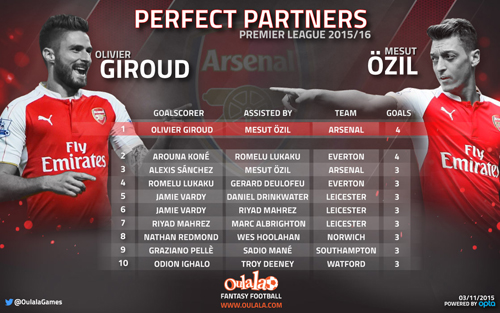 Stats released by fantasy football game www.oulala.com have revealed a partnership at Arsenal that should have Bayern Munich hiding behind the sofa.

The Bundesliga side welcome Arsenal to the Allianz Arena in the Champions League on Wednesday following Arsenal’s 2-0 victory over the Germans at The Emirates a fortnight ago.

Oulala have taken a look at every goal scored in the Premier League, along with who provided the assist, and have uncovered the best attacking partnerships this season.

Joint top of the illustrious list are Arsenal duo Mesut Özil and Oliver Giroud. The Frenchman has netted four goals in the Premier League this season after being assisted by the German on each occasion.

The only other pair in the Premier League to match the Arsenal duo are Everton’s Arouna Kone and Romelu Lukaku. The Belgian has assisted four goals scored by the Ivorian this season.

Eight pairs on Oulala’s list have combined on three occasions.

Ozil is Europe’s top provider with nine assists so it is no surprise to see the German’s name once more. The 27-year-old has set up three of Alexis Sánchez’s six Premier League goals this term.

Notably, high flying Leicester City claim three spots on Oulala’s list with Jamie Vardy and Riyad Mahrez at the heart of the action for the Foxes.

Munich have a productive pair themselves in the Bundesliga. Mario Gotze has assisted three of Robert Lewandowski’s league goals this season.

Özil and Giroud were the goalscorers in Arsenal’s 2-0 win over Munich at the Emirates two weeks ago.

Can the in-form duo link up once again to help put Arsenal’s Champions League aspirations back on track?