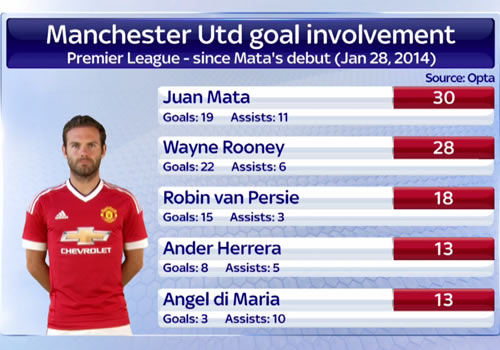 Juan Mata has been in impressive form for United of late Photo: Sky Sports News / Twitter

Juan Mata played another important role for Manchester United as he struck the penalty to secure a 2-0 win over West Bromwich Albion at Old Trafford on Saturday afternoon.

With the Red Devils leading thanks to Jesse Lingard’s opener shortly after half-time, Mata coolly converted his spot kick to secure victory for Louis van Gaal’s men heading into the forthcoming international break.

The Spanish playmaker has been a central figure to United’s recent good form and has enjoyed a regular run of first-team action at Old Trafford since joining the club from Chelsea back in January 2014.

Now, these stats underline just how important the Spain international has been in front of goal for the Red Devils since his move up north.

The numbers show Mata leading the way with a combined total of 30 goals and assists since his transfer from Chelsea.

He is ahead of the likes of Wayne Rooney, Robin van Persie and Ander Herrera in the charts and Red Devils fans will be hoping his fine form can trigger a title challenge this season.