Philippe Coutinho has developed into a key player for Liverpool, especially since Raheem Sterling's exit 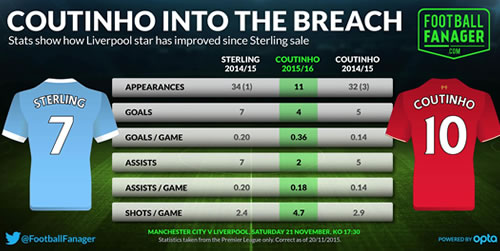 Philippe Coutinho has been in fine form this season Photo: Football Fanager

Ahead of the Reds’ trip to Manchester City this weekend, Coutinho is on course to more than double his goal tally of the last league season, scoring at a rate of 0.36 goals per game, compared to just 0.14 per game in 2014-15.

It’s also almost twice the strike rate of Sterling in his final season in a Liverpool shirt. The England man could only manage seven goals in 2014-15 at a rate of 0.20 per game.

Perhaps the most convincing statistic depicting the Brazilian’s confidence this season is the fact that he is making an average of 4.7 shots on goal per game – up from just 2.9 shots per game in the previous campaign.