Alex Oxlade-Chamberlain has taken to social media to reveal that his rehabilitation from injury is going well as he closes in on a comeback from a hamstring injury.

The England international suffered the problem in the first half of Arsenal’s 3-0 defeat by Sheffield Wednesday in the fourth round of the League Cup and was ruled out for around a month.

Arsene Wenger recently revealed that he is hopeful both Oxlade-Chamberlain and fellow midfielder Aaron Ramsey will be back in action after the current international break.

And Oxlade-Chamberlain appears to be making very good progress in his recovery as he bids to return to full fitness before Arsenal’s trip to West Bromwich Albion in the Premier League on 21 November.

Oxlade-Chamberlain shared the video above of himself taking part in some sprint training on Thursday evening and wrote: “The rehab is going well…looking forward to being back on the pitch soon 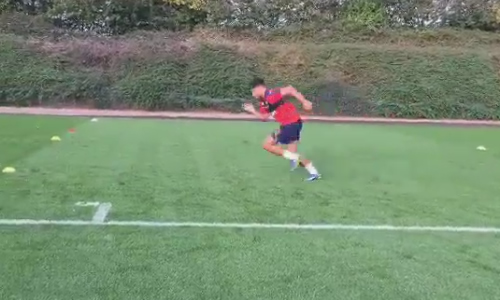 The news will come as a boost to Arsenal, who currently have seven first-team regulars out of action due to injury.

Arsenal are currently second in the Premier League table and level on points with leaders Manchester City.