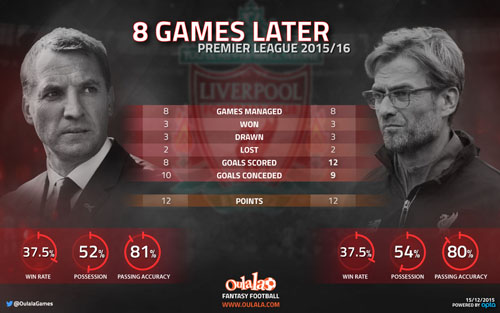 How do Brendan Rodgers and Jurgen Klopp compare? Photo: www.oulala.com

Jurgen Klopp has now managed the same amount of Premier league games this season that former Liverpool manager Brendan Rodgers did prior to his sacking.

Fantasy football game www.oulala.com have taken a look at how the two managers’s results compare and whether or not there really has been any change.

In the weeks leading up to Rodgers’s sacking, the Irishman was under heavy scrutiny for his side losing too many points and not scoring enough goals.

Rodgers’ replacement Klopp was greeted with real enthusiasm and a belief that he could turn things around.

In fact such was the enthusiasm and level of expectation that they even have a word for it, ‘Klopp-mania’. Since the German’s appointment, Liverpool have arguably played better football than they did under Rodgers at the beginning of the season.

Interestingly enough however, despite the increase in goals scored, Klopp now has the same number of points (12) for Liverpool as Rodgers prior to his sacking.

In fact, Oulala’s stats reveal that Klopp also has the same win rate as his predecessor did after eight games. Both have won three, drawn three and lost two.

No doubt this in part due to Liverpool’s continuous defensive frailties. Klopp’s men have only conceded one goal less than with Rodgers.

One of the main culprits seems to be Simon Mignolet. In Liverpool’s last home game against West Brom, the Belgian produced another goalkeeping error that brought the Baggies back into the match.

A half-hearted punch away from goal fell straight to Rondon Gimenez who then fed the ball to Dawson allowing him to finish from close range. The game ended 2-2.

Under Rodgers, Liverpool had an 81 per cent passing accuracy compared to Klopp’s 80 per cent.

Oulala’s stats show that the 48-year-old German has a slightly better possession average than Rodgers, with 54 and 52 per cent respectively.

So what’s changed? It seems as though the majority of Liverpool fans are content to give Klopp the time he needs in the hopes that his positive style and attitude will eventually yield in more positive points.

Indeed after just one win in four in all competitions, including dropping points to Newcastle and at home to West Brom, could it be that a familiar scene is returning to Liverpool.

One which so many of us became to seeing near the end of Rodgers’ reign, that is not scoring enough, conceding too much and dropping points against struggling teams. Indeed the verdict is still out on whether or not Klopp will become a flop or Kop legend.