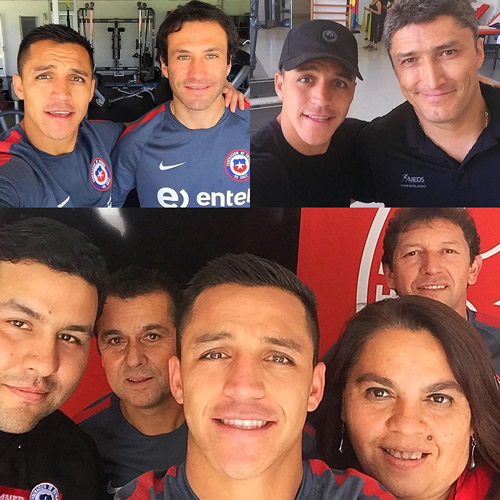 Alexis Sanchez appears to be heading back to the UK as he continues his recovery from injury to hand Arsenal a significant boost ahead of the hectic festive schedule.

The 26-year-old has been recovering from a hamstring injury in his native Chile with the help of his national team’s medical staff in recent weeks as he bids to return to action for the Gunners as soon as possible.

Sanchez has not featured for Arsenal since suffering the muscular strain during the 1-1 draw at Norwich City last month.

However, it now appears that the talismanic forward is on his way back to England ahead of a potential return to action for the Gunners in the coming days.

Sanchez shared the pictures above on his personal Instagram account along with an apparent farewell message on Saturday evening, writing: “I want to thank these people who looked after me during my stay in Chile … physiotherapists and chefs

Thank you… I now hope to do what I like

Speaking ahead of Arsenal’s Premier League trip to Aston Villa, Arsene Wenger told a news conference that the Gunners were expecting Sanchez back before any of the north London club’s other injured stars.

Arsenal head into Sunday’s clash with Villa knowing that a win would lift them to the top of the Premier League table ahead of Leicester City’s clash with Chelsea on Monday night.