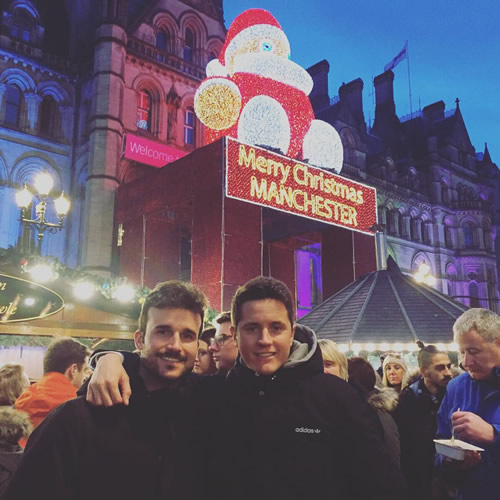 Ander Herrera looks to be doing his best to keep his spirits high during his spell on the sidelines.

The Manchester United midfielder is currently out of action with a hamstring injury and missed the Red Devils’ goalless draw with West Ham United at Old Trafford on Saturday afternoon.

However, the Spaniard is keeping himself busy away from the game as he bids to regain his fitness ahead of the hectic festive Premier League schedule.

Herrera enjoyed visiting a Christmas market in Manchester with a friend as he relaxed on Sunday evening.

Saturday’s draw with the Hammers left United in fourth place in the Premier League table and three points behind leaders Leicester City after 15 games.

The Red Devils head to Wolfsburg on Tuesday night as they look to book their place in the last 16 of the Champions League.

Herrera suffered his injury in the first half of Manchester United’s 2-1 win at Watford last month.