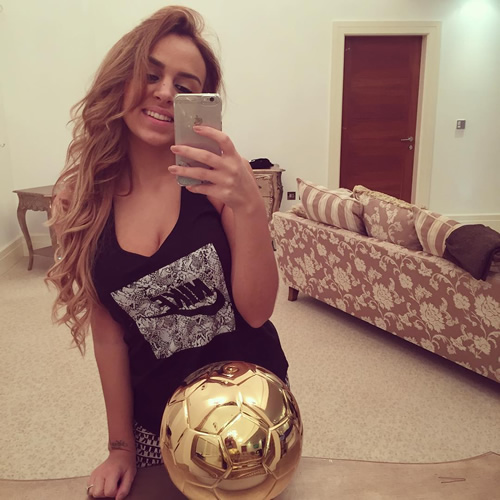 Samantha Martial looked to be in high spirits as she snapped a selfie with her husband’s Golden Boy award on Sunday evening.

Anthony Martial is likely to have needed some cheering up in recent days following Manchester United’s poor run of form.

The 20-year-old French forward scooped the 2015 Golden Boy award for the best young player in Europe earlier this month.

And Martial’s wife Samantha looked delighted to have put her partner’s latest accolade on show in their home in Manchester.

Martial’s 2015 included a successful end to the season with Monaco as they finished third in Ligue 1, a first senior cap for France in September and six goals in his first 19 appearances for United.

Established by Italian publication Tuttosport in 2003, the Golden Boy award is for players under the age of 21 and is voted for by journalists from 30 major newspapers across the continent.

Martial and his United team-mates are now preparing for their crunch Premier League clash with Chelsea at Old Trafford on Monday night.