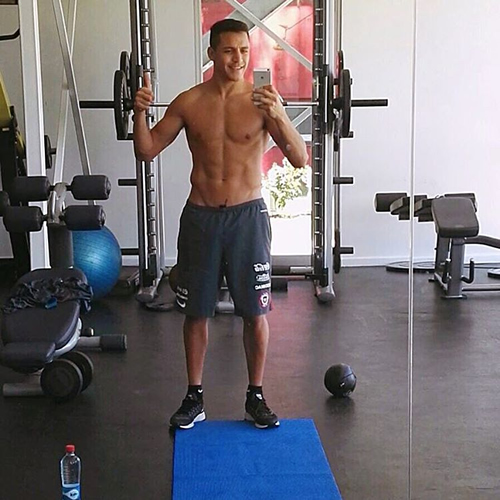 Alexis Sanchez has taken to social media to reveal that he is working hard in the gym as the Arsenal star bids to return to action as soon as possible.

The 26-year-old attacker is currently recovering in his native Chile after suffering a hamstring injury during Arsenal’s 1-1 draw with Norwich City last month.

Sanchez is expected to be sidelined for a few weeks as he bids to regain his fitness before the new year.

And it looks like the Chile international’s recovery is going well.

Sanchez posted the picture above of himself training in the gym on his personal Instagram account and wrote: “Training 💪🏼⚽️☺️👍🏻 … HUAWEI 😉”

Sanchez watched his Arsenal team-mates book their place in the last 16 of the Champions League in style on Wednesday night as they secured a thrilling 3-0 win over Olympiacos in Greece.

Olivier Giroud scored a hat-trick as Arsene Wenger’s men qualified for the knockout stage as runners-up in their group behind Bayern Munich.

Arsenal travel to Aston Villa in the Premier League on Sunday.