Petr Cech and Hector Bellerin surprised a group of children from Arsenal in the Community’s Down’s Syndrome football group ahead of the International Day of People with Disability on Wednesday.

The Arsenal duo met the group in the Gunners’ dressing room, where shirts for Emmanuel, Max, Jacob, Annalise, Connor and Nyella were hanging from the wall.

After putting on their strips, the youngsters were taken down the players’ tunnel to meet Gunnersaurus pitchside.

Cech completed a special morning for the group when he presented them with tickets to the Champions League match against Dinamo Zagreb that evening. 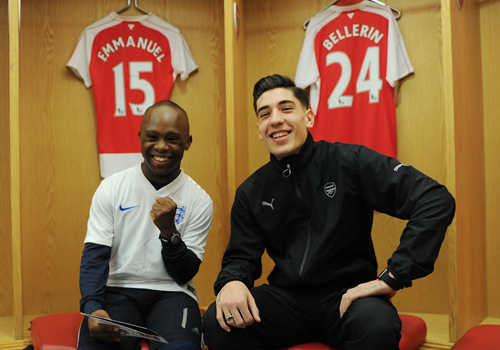 The Downs Syndrome football group is one of a number of Arsenal in the Community programmesPhoto: Arsenal FC

The Down’s Syndrome football group is one of a number of Arsenal in the Community programmes for people with disabilities.

There are weekly football sessions held for young people and adults with a range of disabilities, mental health diagnoses and learning disabilities. The club also provides regular coaching for amputee footballers.

Bellerin and Cech will be hoping to feature when Arsenal host Sunderland on Saturday.