Mesut Ozil has made a promise to the One Direction star if Arsenal win the Premier League this season... 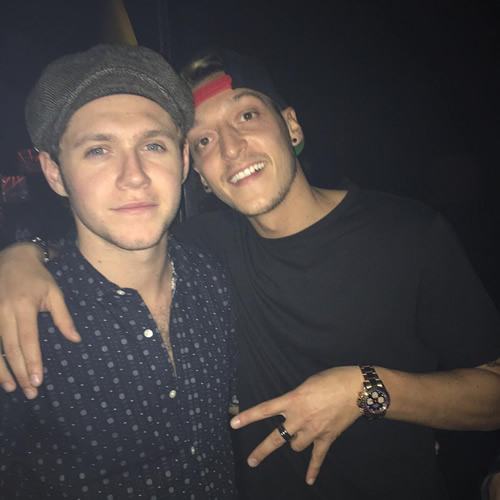 Mesut Ozil has promised to give One Direction star Niall Horan front-row tickets to Arsenal’s trophy ceremony if the Gunners win the Premier League this season.

The north London side are tipped to be serious contenders for the top-flight crown this season and moved to the top of the table thanks to Monday evening’s 2-0 victory over Bournemouth at Emirates Stadium.

Ozil has been in sensational form for Arsenal so far this season and notched up his 16th Premier League assist of the campaign when his corner set up Gabriel Paulista for the Gunners’ opener on Monday.

The World Cup winner then made the points secure in the second half when he slotted home to seal the win.

Ozil and Horan are good friends and were pictured partying together earlier this year.

And the Arsenal playmaker was quick to respond to the singer on Twitter on Monday evening after the Irishman praised Ozil for his display against Bournemouth.

Arsenal host Newcastle in their next Premier League game on Saturday afternoon.