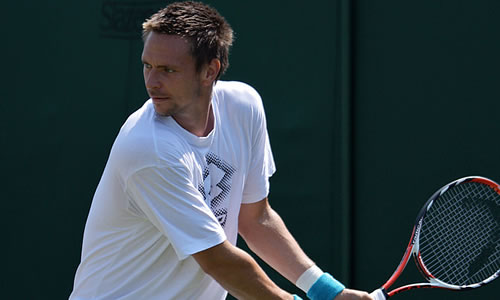 Robin Soderling is a former world No4 Photo: Marianne Bevis

Big Swede Robin Soderling, a former world No4, twice a finalist at the French Open, and a quarter-finalist at four more Grand Slams, has announced his retirement from tennis after battling glandular fever for over four years.

In an open letter just published, Soderling explains that his repeated attempts to regain fitness since playing—and winning—his last tournament in Bastad in July 2011 had failed and that he had “decided to end my career as a professional tennis player.”

Now age 31, Soderling went on to talk of his constant efforts to regain the fitness needed to return to the tour.

“A few weeks before the Swedish Open in Bastad in 2011, I became ill with glandular fever. Because I did not then realise the seriousness of this, I made the mistake of continuing to train and compete with the virus in my body… It has been impossible for me to train 100 percent, and I was forced to rest after any physical effort. Some periods I felt so bad that I was completely bedridden.

“This past year, however, my health improved and I have been able to increase my exercise dose, but my recovery after exercise is unfortunately still not as I would like. To play competitions that require physical exertion over an extended period has thus been impossible.

“Through all these years I believed I would be able to get back to the world elite in tennis but now I’ve realised that I will not be healthy enough to be able to play tennis at the level I demand of myself. Of course this is a very sad decision. Now in hindsight, I feel that I should have listened better to my body… but I know I’ve done everything in my power in recent years to eradicate the disease.

“I feel fortunate that I can proudly look back on my career as very successful. I have achieved and have experienced things that few are privileged to do.”

Many of Soderling’s greatest successes—seven of his 10 titles and six of a further 10 finals—came on indoor courts, where he twice won the prestigious Rotterdam 500 and his only Masters title in Paris.

But it was perhaps on clay where he made the biggest headlines of his career and then began his greatest strides up the rankings in 2009. That was the year in which he won his first clay title, in Bastad, but more famously, the year that he halted the four-title run of then No1 Rafael Nadal at the French Open in the fourth round.

That result opened the way for Roger Federer’s only victory at Roland Garros after the Swiss beat the Swede in the final. But the next year, Soderling also reached the French final, and this time halted another famed record. By beating Federer in the quarters, he brought to an end the Swiss man’s 23 consecutive Grand Slam semi-finals, but would lose the title match in straight sets—to Nadal.

Despite the loss, 2010 became the Swede’s most successful season yet: He went on to win that Masters title, reached the quarters at both Wimbledon and the US Open, and a career-high ranking of No4.

At the start of 2011, 26-year-old Soderling seemed to be going from strength to strength. He won a career-best four titles along with another quarter-final run at Roland Garros—where Nadal again proving insurmountable.

But Soderling’s final victory match in Bastad, where he did not drop a set, would prove to be the last he would ever play. Soon after, he was diagnosed with glandular fever.

Perhaps with this end point in mind, Soderling developed a number of business interests, including his own tennis equipment line, and took on the directorship of the ATP’s Stockholm Open. He concluded his letter by looking forward.

“First of all, I have my wonderful partner and two children who I spend a lot of time with. I have also been instrumental in starting the company RS-Tennis, where we manufacture tennis balls and other tennis equipment. It’s been surprisingly good, and we have already established sales in more than 40 countries.”

So long has it been since Soderling’s big game challenged the elite of the game that it seemed worth recalling the words I wrote in the autumn of that year for a piece entitled, Robin Soderling: a big man felled.

When Robin Soderling announced, on the day he was to begin his [US Open] campaign, that he could not play his first match in New York, most assumed it was down to the wrist injury that had kept him out of competition throughout the US Open Series. But the Tweet that followed talked instead of illness: “Hi my friends”, it ran.

It was more than week before Soderling revealed—again in a Tweet—that he had glandular fever: “It’s been a difficult period but I am getting better. Doctors confirmed that I have had mono for quite some time and this truly explains my lack of energy, but my health is improving and I hope to be back on the court as soon as possible.”

His eventual absence at the World Tour Finals was a loss both for him and the event, for there has always been something about the Swede that makes him stand apart from the rest of tour.

While he follows in the footsteps of countrymen—the likes of Bjorn Borg, Mats Wilander and Stefan Edberg—who painted a Scandinavian image of fleet-footed, nimbly-built, flaxen-haired players, he claims little of that inheritance.

But what he lacks in grace of movement he makes up for in weight of shot. He strides rather than walks the baseline and hits a tennis ball with the kind of power that snaps like a pistol shot.

He plays in an era that expects its stars to be open-access, media-friendly and style-conscious when he prefers low-key, private and unstarry… Soderling does not joke like Djokovic, charm like Nadal nor is conversationally expansive like Federer. Instead, he is more reticent about stepping into the media limelight. He chose the quiet summer hiatus, for example, to launch not one but three charitable campaigns.

In fact so successful is he at maintaining a low profile that it’s easy to forget Soderling made his persistent rise into the top five during one of the sport’s most competitive decades, and has stayed there for over a year—until now.

And his latest message keeps it as simple as usual: “Very sorry to disappoint my fans, tournaments, and sponsors but I am still not able to play. My mono is not completely cured yet and so I have to take another month off.”

Whenever he does make it back, it will be without fanfares, fireworks or fuss. Let’s hope it is soon.

Sadly, it will not be at all.