Photo: Cesc Fabregas all smiles with Revenge actor ahead of Chelsea v Watford 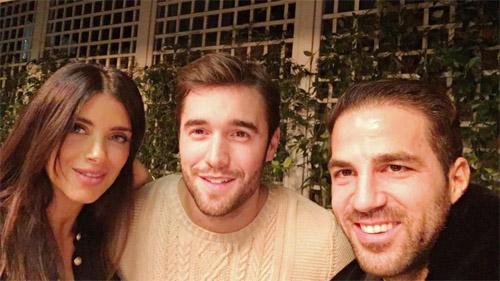 Cesc Fabregas was all smiles with Revenge star Josh Brown ahead of Chelsea’s clash against Watford on Saturday evening.

The Spain international returned to the Chelsea starting line-up on Saturday afternoon as the defending Premier League champions eased to a 3-1 win against Sunderland at Stamford Bridge.

Goals from Branislav Ivanovic, Pedro Rodriguez and Oscar put Chelsea into a commanding lead before Sunderland striker Fabio Borini netted a late consolation for the visitors.

And the Blues midfielder appeared to be in high spirits after he joined his wife Daniella for a selfie with British actor Josh Bowman and the star of Revenge on Wednesday evening.

The 28-year-old Spanish playmaker has made two assists in 17 Premier League games for the west London side so far this season.