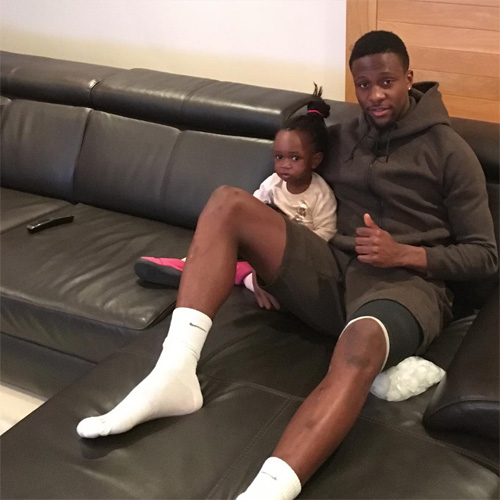 Divock Origi took to Instagram to underline his desire to make a swift recovery from injury after the striker was forced off during Liverpool’s 1-0 win against Leicester City.

The Belgium international was substituted in the 38th minute of the Boxing Day clash with a suspected hamstring problem and was replaced by compatriot Christian Benteke.

The former Aston Villa striker made the breakthrough after half-time to seal close-fought victory for Liverpool after a three-game winless run in the Premier League.

Speaking at his post-match media conference, Jurgen Klopp ruled Origi out of the Merseyside’s clash against Sunderland at Stadium of Light in the Premier League on Wednesday night.

Origi wrote on the photo-sharing app: “Lord knows.. I’ll be back soon! My Godchild taking good care of me 👍🏾 Happy X-mass to everyone 🎁🎉”

The Reds are currently without Slovakia international Martin Skrtel due to a hamstring injury, whilst the Merseyside outfit are hoping to get Daniel Sturridge back on the pitch.

Liverpool are in eighth place in the Premier League table and five points behind fourth-placed Tottenham Hotspur ahead of their trip to Black Cats mid-week.