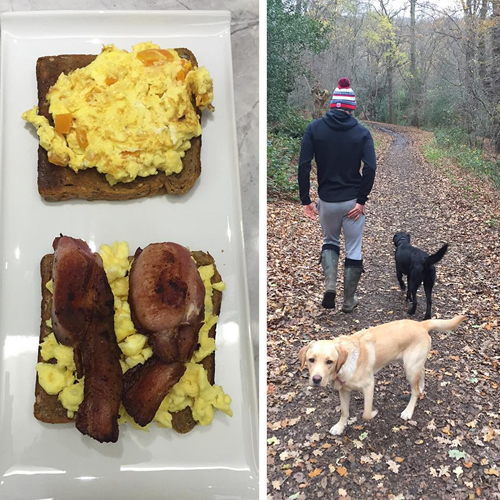 Harry Kane enjoyed brunch with his girlfriend and took his dogs for a stroll as he enjoyed some well-earned downtime on Sunday after Tottenham’s 1-1 draw at West Brom.

Mauricio Pochettino’s men were held to a draw by the Baggies at The Hawthorns after Dele Alli’s opener was cancelled out by James McClean’s header.

Striker Kane played the full 90 minutes of the game, which left Spurs in fifth place in the Premier League table and six points behind leaders Leicester City.

And the England international looks like he made the most of his day off ahead of Spurs’ clash with Monaco at White Hart Lane in the Europa League on Thursday night.

Kane posted the pictures above on his personal Instagram account on Monday morning and wrote: “Chilled Sunday yesterday. Nice brunch from @kategoodersxx

Feeling fresh today for an important week ahead! #dogwalk #brunch”

Tottenham return to Premier League action with a home clash against Norwich City at White Hart Lane on Sunday afternoon.

Kane has scored eight goals in 15 league games so far this season for the Lilywhites.