Photo: Harry Kane all smiles with his girlfriend ahead of Tottenham v Norwich

Harry Kane was feeling festive with his girlfriend Katie on Friday afternoon... 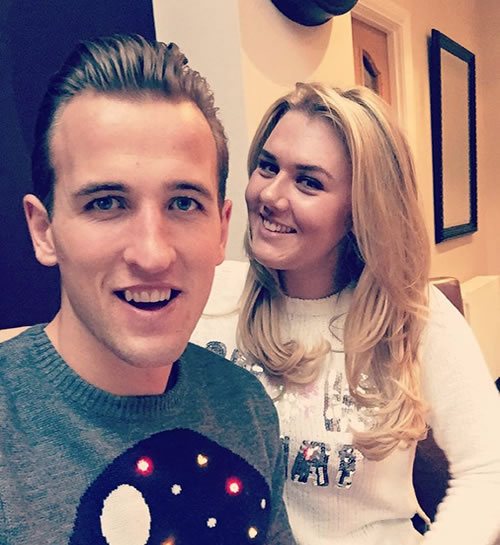 Harry Kane was feeling festive as he donned a Christmas jumped with his girlfriend Katie Goodland on Friday.

Kane and his Tottenham Hotspur team-mates have been gearing up for their Premier League clash against Norwich City at White Hart Lane and looked to be in good spirits as he celebrated Christmas Day with his partner.

The England international snapped the selfie above and wrote on his personal Instagram account: “Merry Christmas Everyone 🎅🎄🎁 @kategoodersxx”

Tottenham head into Saturday’s game against the Canaries in fourth place in the Premier League table as Mauricio Pochettino’s men look to break back into the top four this season.

Kane has been in good form for the Lilywhites so far this term, and has scored nine goals in 17 Premier League games for the north London outfit.

The PFA young player of the year has also netted twice in the Europa League to help Spurs reach the last 32 of Europe’s second tier club competition.

Photos: Bellerin, Ramsey all smiles as Arsenal train ahead of Southampton trip