Jose Mourinho has admitted his concern after watching his Chelsea side lose 1-0 to Bournemouth as they slumped to their eighth defeat of the season.

Glenn Murray’s header in the 82nd minute gave the visitors a famous win at Stamford Bridge as the Blues’ torrid season continued in west London.

Maybe now we have to think about top six

Chelsea find themselves languishing in 14th place in the Premier League table having taken just 15 points from their opening 15 games, with their title defence in tatters.

The Blues are 21 points worse off than they were at this stage last season and find themselves only three points above the relegation zone.

Speaking after Saturday’s shock loss in front of his side’s home fans, Mourinho discussed Chelsea’s stuttering form at length and revealed how he is planning to help turn their season around.

Mourinho told Sky Sports: “I am concerned, of course.

“There is no chance that Chelsea will be fighting relegation. That is not the problem.

“It is that our objective is to finish top four. Before this game it was realistic to think that our quality would take us out of this position, but maybe now we have to think about top six. 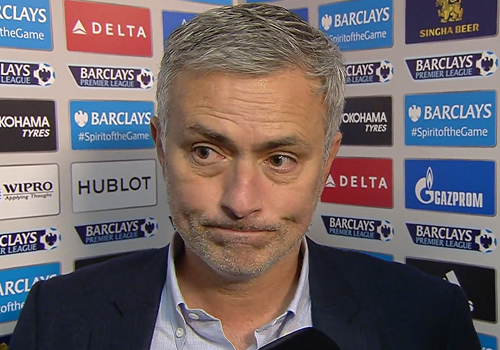 “If our players are not able to give the maximum every day that is a problem. If you analyse match after match there are a few layers where it is difficult to be consistent. You think there is evolution, but maybe it is just one moment in which they are good.”

Asked about Saturday’s loss, he continued: “The result is not fair.

“In the first half we were soft and did not press and were not aggressive and were not intense. In the second half everything changed. We were aggressive, created chances and had crosses and a clear penalty that the referee did not see. That is the game.

“In the moment when our opponent were thinking just about defending a clean sheet they cross the halfway line for the first time and scored.

“If it was offside it is another episode that goes against us, but I did not see it.”

Chelsea host Porto on Wednesday night as they look to book their place in the knockout phase of the Champions League.