Stats show Chelsea's dramatic slump in form after 16 Premier League games, with the Blues languishing in 16th place in the table 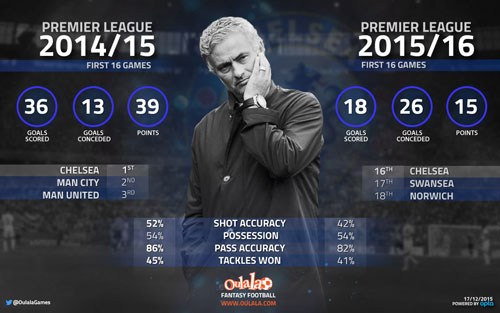 Chelsea have struggled to maintain their high standards Photo: www.oulala.com

While the 52-year-old’s departure is still something of a surprise despite the west London side’s miserable run of form, www.oulala.com’s infographic highlights how Mourinho was unable to halt the defending champions’ dramatic slump in the 2015-16 season.

However, after their 2-1 defeat by the Foxes on Monday night, the west Londoners were left on 15 points after letting in 26 goals and managing to score just 18 times in the Premier League.

With Diego Costa and Eden Hazard both struggling to replicate their performances from the 2014-15 season, it is unsurprising that Chelsea’s shot accuracy has dropped from 52 per cent to 42 per cent this term.

Chelsea midfielders Cesc Fabregas and Nemanja Matic have also suffered a loss of confidence and form, contributing to a four per-cent reduction in terms of passing accuracy, from 86 per cent to 82 per cent.

While the defending champions have maintained a consistent level in terms of possession, the Blues have only won 41 per cent of their attempted tackles, which is also a four per cent drop from last season’s figure of 45 per cent after 16 games.

Perhaps the most damning statistic is their league position, though. Chelsea were top at Christmas last year, but 12 months later, are languishing in 16th place and a point above the relegation zone.

Chelsea host Sunderland at Stamford Bridge in their next Premier League game on Saturday afternoon.

Insider: Doors are open for Pep Guardiola to take over at Chelsea