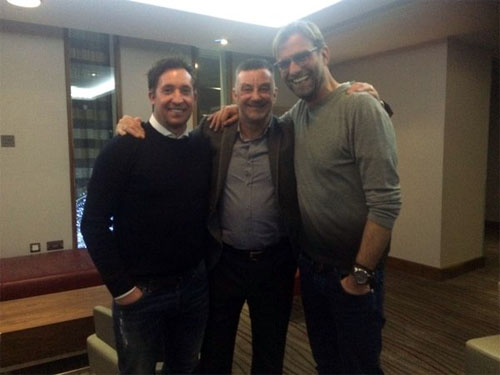 Jurgen Klopp has certainly proven a hit with the Liverpool legends since his appointment in October.

The Reds manager won over many of the ex-professionals last weekend after he gathered his players to salute The Kop following a dramatic 2-2 draw with West Bromwich Albion at Anfield.

Klopp will be hoping that his Liverpool strikers can help the Reds secure a return to winning ways in the Premier League at promoted side Watford on Sunday afternoon.

And how the charismatic German would love a strike-force of John Aldridge and Robbie Fowler in their prime to spearhead his improving side.

The former Republic of Ireland striker posted a snap with Fowler and Klopp, heaping praise on the former Borussia Dortmund manager.

Liverpool are in ninth place in the Premier League table and six points behind fourth-placed Manchester United.

The Reds have only won one Premier League game at home in three attempts since Klopp took over the reins from Brendan Rodgers in October.