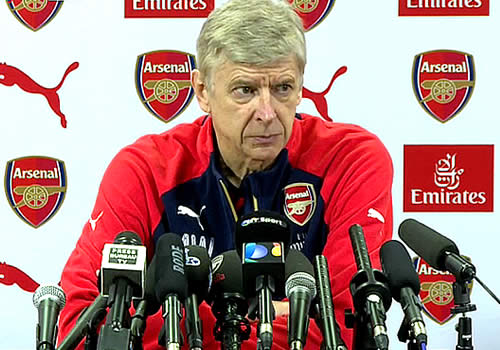 Arsene Wenger insists that he does not yet know how long Alexis Sanchez’s hamstring injury will keep him out of action for Arsenal.

The Chile international limped off during the second half of the Gunners’ 1-1 draw with Norwich City last weekend after suffering the muscular problem at Carrow Road and will definitely miss Sunderland’s visit to The Emirates on Saturday.

Asked how long Sanchez is expected to be out for, Wenger told a news conference at Arsenal’s London Colney training ground on Friday morning: “I don’t know, honestly.

“Sanchez is a hamstring [injury] but I don’t know how long it will take. Usually he is a quick one to recover.”

Wenger also said that Arsenal are waiting to discover the extent of Santi Cazorla’s knee injury, with the Spaniard set to see a specialist in the coming days.

There have been reports in the British media in recent days that Cazorla could be out for as long as three months. And when asked if Cazorla could be sidelined until March, Wenger replied: “It’s possible, yes.

“Cazorla we don’t know [how long he will be out] until he has seen the specialist. I have no news on that.”

There was some positive news on the injury front, however, as Wenger confirmed that Theo Walcott and Laurent Koscielny will undergo late fitness tests ahead of the visit of the Black Cats.

“The injury situation is that the players who have been injured last week won’t play tomorrow,” said Wenger.

“Who will be back? Maybe in the squad Koscielny, maybe Walcott. [I’ll make a] decision tomorrow morning.”

Arsenal, who finished third last season, head into Saturday’s game looking to return to winning ways after taking just two points from the last nine available in the Premier League.