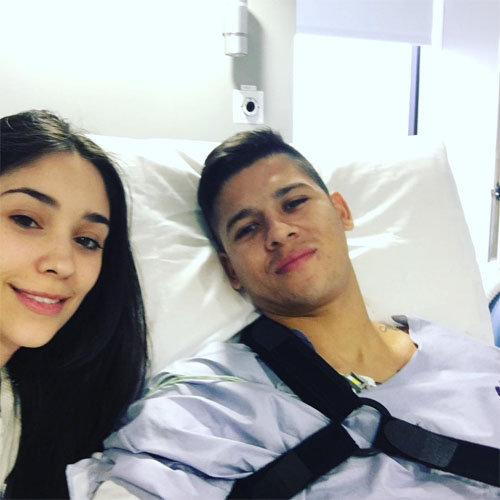 Marcos Rojo was all smiles with his model wife after the Manchester United defender successfully underwent surgery on Wednesday morning.

The Red Devils defender was forced to undergo an operation on a shoulder problem after he suffered the injury setback during first-team training earlier this month.

The Argentina international has endured a stop-start season after having made just six Premier League appearances for the 20-time English champions this term.

And Rojo, who moved to United from Sporting Lisbon in a £16m deal in 2014, was all smiles with his wife Eugenia Lusardo on his hospital bed as the WAG posted a selfie on her Instagram page.
She wrote: “and with my love a bit anesthetized haha but good !! I love you ❤️ beautiful @marcosrojo”

The United centre-half has missed the Red Devils’s last three games in all competitions due to the problem.

Louis van Gaal is facing an injury crisis amongst his defenders after Chris Smalling and Matteo Darmian joined Phil Jones, Luke Shaw, Antonio Valencia and Rojo on the sidelines.