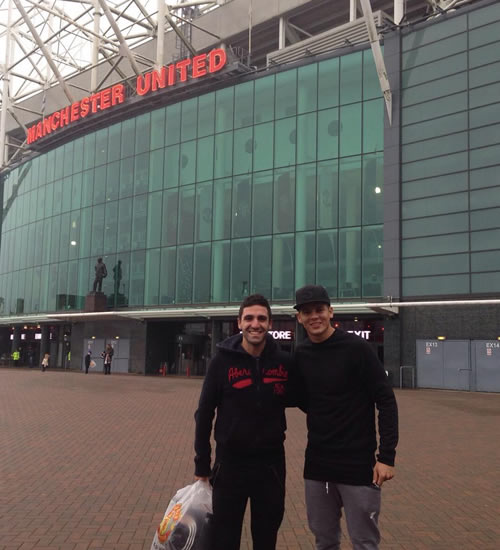 Marcos Rojo posed for this snap with his friend on Wednesday outside Old Trafford Photo: Marcos Rojo / Instagram

Marcos Rojo looks to be keeping himself in good spirits as he continues his recovery from a shoulder injury and eyes a comeback for Manchester United.

The defender has been ruled out of action for a number of weeks after the centre-half was forced to have surgery on a shoulder problem following the injury suffered in training earlier this month.

The Argentina international, who joined Red Devils from Sporting Lisbon in a £16m deal following the 2014 World Cup, has been limited to just six Premier League appearances for Louis van Gaal’s side so far this season.

However, Rojo appears to be keeping himself busy as he showed a friend around Old Trafford on Wednesday afternoon.

Rojo shared the picture above on his personal Instagram account and wrote: “The last day of my friend @gimenezrulo in Manchester, visiting Old Trafford.”

Rojo watched his Manchester United team-mates play out a goalless draw with Chelsea at Old Trafford on Monday night.