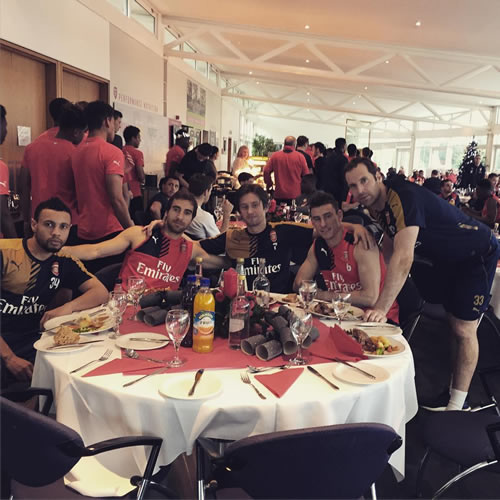 Mathieu Flamini was doing his best to keep injured duo Francis Coquelin and Tomas Rosicky in good spirits on Thursday afternoon during Arsenal’s Christmas lunch at the club’s training ground.

Coquelin is currently sidelined with a knee injury picked up during the 2-1 loss to West Bromwich Albion last month and is not due to make his return to action until the new year.

Fellow midfielder Rosicky, meanwhile, has not featured for Arsenal so far this season due to a knee injury.

However, France international Flamini looked to be keeping spirits high during the Gunners’ Christmas lunch, as he posed for a picture with the duo, along with Laurent Koscielny and Petr Cech.

Flamini posted the picture above on his personal Instagram account on Thursday afternoon and wrote: “Merry Christmas to everyone 🎁🎁 @arsenal #gunners #christmas 🌲🌲”

Flamini and his Arsenal team-mates are preparing for their crunch Premier League clash with Manchester City at Emirates Stadium on Monday night, the last top-flight game before Christmas.

Photo: Erik Lamela puts his feet up ahead of Southampton v Tottenham