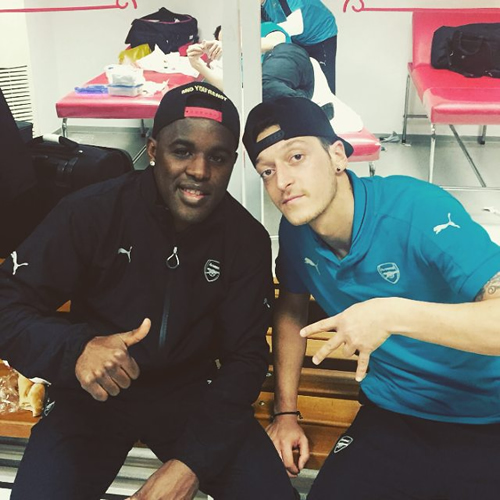 Mesut Ozil posed for a picture with Joel Campbell in the dressing room after Arsenal’s impressive 3-0 win at Olympiacos booked the Gunners’ place in the last 16 of the Champions League.

Both Ozil and Campbell were in good form as Olivier Giroud hit a brilliant hat-trick on a memorable night for the Gunners in Athens.

Arsene Wenger’s men qualified for the knockout phase as runners-up in their group behind Bayern Munich.

A clearly delighted Ozil posted the picture above on his personal Instagram account after the game and wrote: “Yaaa Gunners Yaaaa … welcome to knock-out-stage! 😊🚨🔝 #YaGunnersYa #Arsenal #UCL”

The France international then made it 2-0 four minutes after half-time when he coolly slotted home from close range after neat build-up play from Campbell.

Giroud then completed his hat-trick with a confidently-taken penalty after Omar Elabdellaoui was adjudged to have handled in the box.

Arsenal travel to Aston Villa in the Premier League on Sunday afternoon.