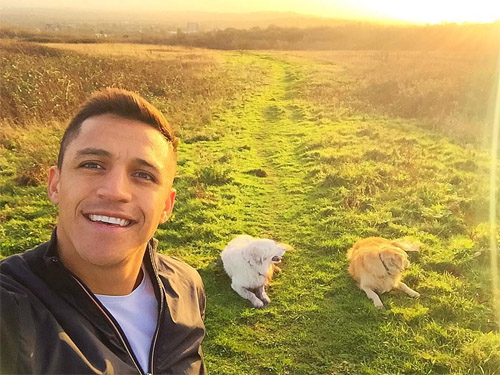 Alexis Sanchez was in good spirits ahead of his potential return to action at Southampton on Saturday as the Arsenal forward took his dogs for a walk on Wednesday evening.

The 27-year-old forward hasn’t played for Arsenal since suffering a hamstring injury during the 1-1 draw with Norwich earlier this month and he sat out Monday night’s 2-1 win over Manchester City at Emirates Stadium.

Arsenal’s 2-1 victory over Manchester City on Monday night was tainted after Arsene Wenger confirmed that the Chile international had been dealt a setback in his recovery from a hamstring problem and won’t return before 10 January.

However, Gunners star Sanchez appeared to be taking his mind off his injury problems as the former Barcelona striker took his golden retrievers Atom and Humber for a walk on a beautiful winter Wednesday evening.

Arsenal return to Premier League action with a trip to Southampton on Boxing Day, before hosting Bournemouth at The Emirates on 28 December.

Photo: Dejan Lovren all smiles with Steven Gerrard ahead of Liverpool v Leicester