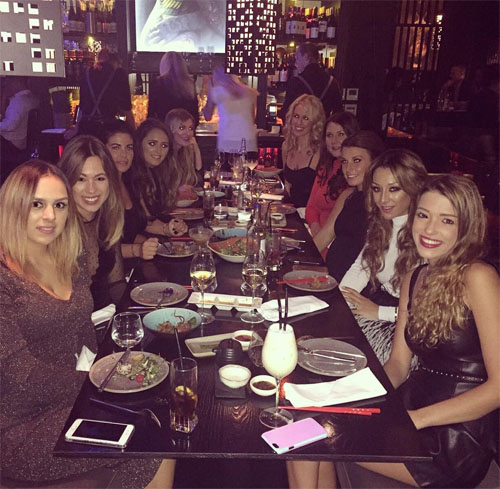 The French beauty joined Coleen Rooney and some of the players’s girlfriends and wives for dinner on Friday night.

Louis van Gaal’s men are in action on Saturday evening as United look to beat Bournemouth at Dean’s Court.

And Samantha Martial, whose husband moved to Old Trafford in the summer transfer window, posted the above snap from their dinner at Tattu restaurant.

She wrote on her Instagram page: “Last night 👌🏼🍴📍tattu restaurant”

Martial scored his first United goal since late October in a 3-2 defeat by Wolfsburg in their final Champions League group-stage game on Wednesday night.

The France international became Europe’s most-expensive teenager after he joined the Red Devils in a £36m deal on transfer deadline day in September.

United are in fourth place and a mere three points behind surprise Premier League leaders Leicester City ahead of their trip to Bournemouth.

Jamie Carragher: This Arsenal star is one of the most underrated in England