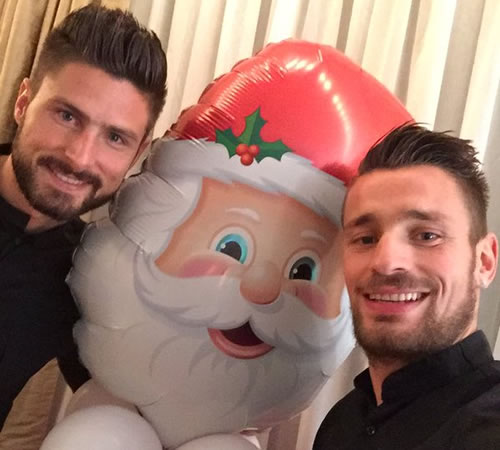 Olivier Giroud and Mathieu Debuchy looked in good spirits as they spent a French Christmas together ahead of Arsenal’s trip to Southampton in the Premier League on Saturday.

Arsene Wenger’s first-team squad took part in a light training session early on Friday morning before returning to their families for Christmas lunch.

Both Giroud and Debuchy will be hoping to feature when Arsenal take on Southampton at St Mary’s on Boxing Day.

And the France internationals looked to be in a festive mood as they snapped a selfie with an inflatable Santa Claus.

Debuchy shared the picture above on his personal Twitter account on Friday evening and wrote: “Merry Christmas @_OlivierGiroud_”

Arsenal head into Saturday’s game in second place in the Premier League table after their impressive 2-1 win over Manchester City on Monday night.

The Gunners are two points behind Leicester and are the favourites to win the title this season, despite not having lifted the trophy since 2004.