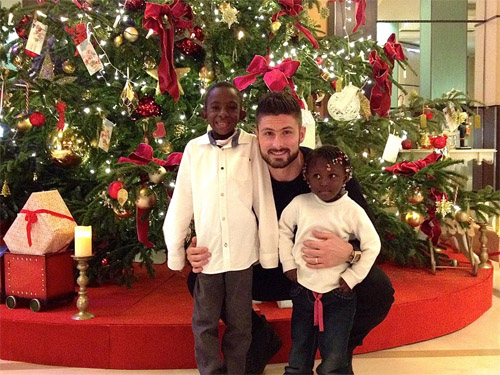 Olivier Giroud has been embracing the Christmas spirit with his recent #SaveNato campaign.

The Arsenal striker has been in superb form on the pitch after the striker scored his fifth goal in four games in all competitions at The Emirates in the Premier League on Monday night.

But the 29-year-old has also been making a contribution to society off the pitch, too, as Giroud sought to raise money for a 14-year-old boy from Madagascar to have life-saving heart surgery.

And the Arsenal striker posted the above photo on his Facebook page and the following message after successfully raising €10,000 for Nato’s crucial operation:

“End of #SaveNato campaign. A big thanks to the 177 contributors coming from the 5 continents. I am very touched by this remarkable solidarity impulse. Best wishes to you and yours this holiday season and a warm thought for Gloriane and Aymard who have just returned home to Burkina Faso with a brand new heart.”

Giroud has scored 10 goals in 17 Premier League appearances for Arsenal so far this season.

The French striker has netted eight times in his last 10 games in all competitions.