Photo: Cesc Fabregas put through his paces ahead of Leicester v Chelsea 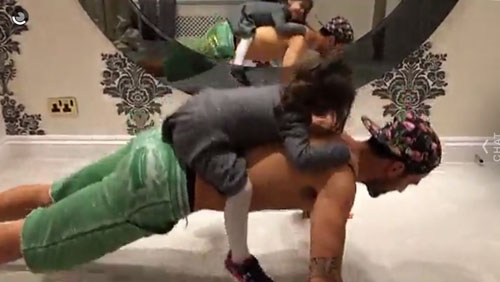 Cesc Fabregas was put through his paces by his daughter as the Chelsea midfielder worked out ahead of Monday’s trip to Leicester City.

The Spain international was left on the bench for the west London side’s 2-0 victory over Porto in the Champions League on Wednesday night.

Fabregas has been in disappointing form for the defending Premier League champions in recent months, struggling to reproduce last season’s performances.

With his place under threat in Jose Mourinho’s starting line-up, Fabregas recruited his daughter Lia for an impromptu workout on Thursday night.

Fabregas posted a series of videos on Snapchat as the former Arsenal captain did press ups with his daughter on his back.

The World Cup winner has made two assists in 15 Premier League games for the west London outfit this term.

Defending champions Chelsea are a staggering 17 points behind Premier League leaders Leicester City ahead of their trip to King Power Stadium on Monday night.