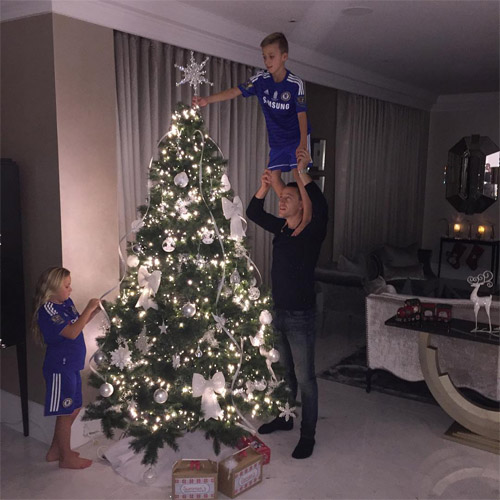 Chelsea may be nowhere near the top of the Premier League table, but John Terry was within touching distance of the top of his Christmas tree on Tuesday.

The Blues skipper is currently sidelined with an ankle injury which kept the 34-year-old out of Chelsea’s goalless draw with Tottenham Hotspur at White Hart Lane on Sunday.

Terry picked up the problem during the west London side’s 4-0 win against Maccabi Tel-Aviv in the Champions League last week, coming off in the second half in Israel.

However, the former England defender’s ankle appeared strong enough to cope with the weight of Terry’s son, George, as he put the finishing touches to the Terry Christmas tree.

Terry posted the above snap and wrote: “Christmas Tree all done 🎄 Good work Mummy and my little helpers Georgie and Summer putting the finishing touches on the tree. 🎁🎀☃👨‍👩‍👧‍👦”

The former England captain has made 10 Premier League appearances this season.

Terry, who captained the Blues to the Champions League glory in 2012, won his fourth Premier League crown last season.