Photo: Dejan Lovren all smiles with Steven Gerrard ahead of Liverpool v Leicester 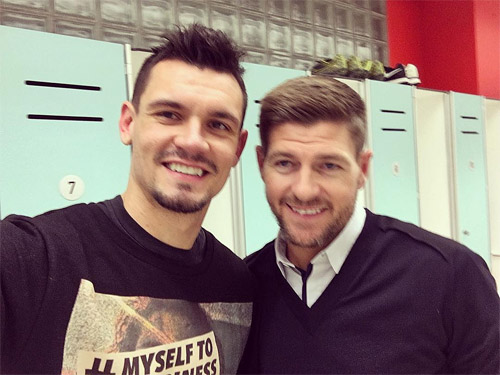 Dejan Lovren was all smiles with Steven Gerrard ahead of Liverpool’s Boxing Day clash against Leicester City.

The Croatia international is aiming to be fit for the visit of the Premier League leaders at Anfield.

The Merseyside outfit suffered a further injury blow last weekend after Martin Skrtel picked up a hamstring problem which will keep the centre-half sidelined for six weeks.

However, Liverpool supporters will hope Lovren is ready to line up for the Reds against Leicester after drawing inspiration from a club legend on Wednesday evening.

Lovren posted the above selfie and wrote on his Instagram page: “😀😀 words are not needed 💪”

The Croatia defender required oxygen on the pitch before he was carried off on a stretcher after a clash with West Brom midfielder Gardner earlier this month.

The Reds are 14 points behind Leicester ahead of their clash against the leaders.

Photo: Harry Kane all smiles at Christmas party ahead of Tottenham v Norwich