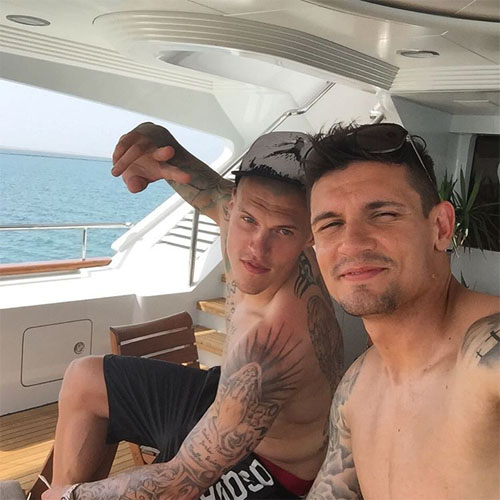 Dejan Lovren may be contending with a fresh injury blow, the Liverpool defender still remembered to send a message to birthday boy Martin Skrtel.

The Croatia international required oxygen on the pitch before he was carried off on a stretcher after a clash with West Brom midfielder Craig Gardner during Sunday’s 2-2 draw with West Brom at Anfield.

Liverpool centre-half Mamadou Sakho has only just returned to first-team training after he injured his knee during a 2-1 loss to Crystal Palace in November.

Lovren has shown signs of an understanding with his fellow Eastern European defender Skrtel in recent months, and the former Southampton man sent a message to the Slovakian on his 31st birthday.

Lovren posted the above snap presumably from a sunny break earlier this year and wrote on his Instagram page: “Happy Bday brate 😉 this time we don’t have a watch for u 😜😂 @martin37skrtel”

The birthday boy has scored one goal in 16 Premier League games for the Merseyside outfit.

The Reds are in ninth place and five points behind fourth-placed Manchester United in the Premier League table.