It was quite a night for Divock Origi at Southampton... 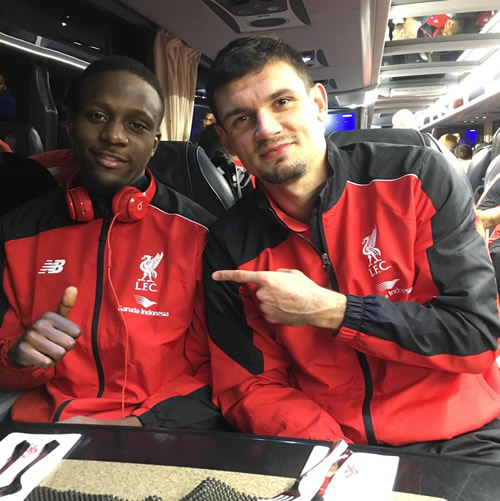 Dejan Lovren posed for a picture with hat-trick hero Divock Origi after the Belgian helped to fire Liverpool to an emphatic 6-1 League Cup quarter-final win over Southampton on Wednesday night.

Lovren, who was returning to his former club Southampton, posted the picture above of himself with Origi on the Liverpool team bus on his personal Instagram account and wrote: “What a win tonight

Sadio Mane gave Southampton the lead inside the first minute with a header but Daniel Sturridge responded by hitting two goals in four minutes midway through the first half to put Jurgen Klopp’s men in control.

Origi then deflected in Alberto Moreno’s shot in on the sttoke of half-time, before netting a spectacular fourth.

Substitute Jordon Ibe added to the scoreline, before Origi glanced home a header for his third and Liverpool’s sixth to complete the rout.

Liverpool will take on Stoke City in the semi-finals in January, with Everton facing Manchester City in the other tie.