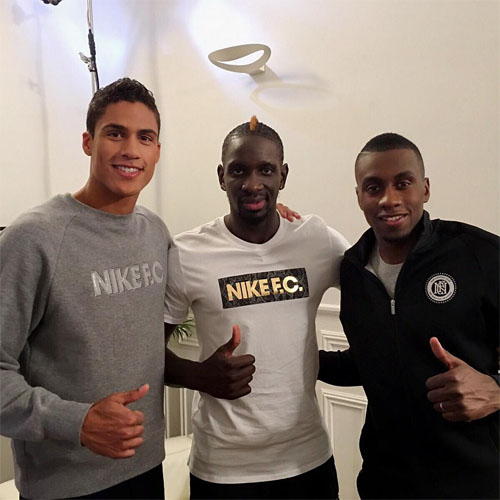 Mamadou Sakho was all smiles with Chelsea targets Raphael Varane and Blaise Matuidi on Monday afternoon.

The Liverpool defender is working on his recovery from a knee injury which the France international suffered during a 2-1 defeat by Crystal Palace at Anfield in the Premier League last month.

Varane is also sidelined with injury after the Real Madrid defender picked up a hamstring problem during their Champions League clash against Shakthar Donetsk last month.

The 21-year-old centre-half has been linked with a move to struggling defending Premier League champions Chelsea in recent months, with his compatriot Kurt Zouma already at Stamford Bridge.

Paris Saint-Germain star Matuidi has also been touted as a potential target for the west London side as Jose Mourinho looks to improve his midfield options following Cesc Fabregas’s dramatic decline.

And Blues supporters will be hoping that Sakho was selling Varane and Matuidi on the perks of the Premier League as the French trio caught up yesterday.

Sakho wrote on his Instagram page: “Good times yesterday with @blaisematuidiofficiel and @raphaelvarane at the @nikefootball ‘s apartment!”