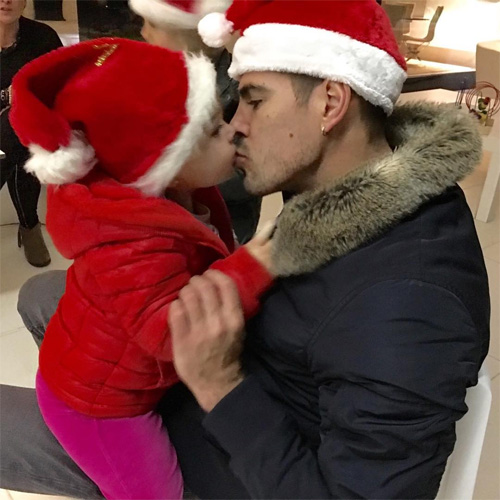 Victor Valdes was getting festive with one of his kids as the Manchester United goalkeeper celebrated Christmas on Wednesday night.

The Spanish shot stopper has been out-of-favour at Old Trafford since the start of the season after the experience shot stopper fell out with United manager Louis van Gaal.

The 33-year-old shot stopper has been forced to train away from the United first-team as the three-time Champions League winner continues to be linked with a January move away from Old Trafford.

And Valdes’s wife Yolanda Cardona posted the above snap of the goalkeeper and one of his kids enjoying a Christmas smooch ahead of United’s trip to Stoke City at Britannia Stadium on Boxing Day.

Cardona wrote on her Instagram page: “Feliz Navidad! Merry Christmas!! A kiss to all💋”

The experienced Spanish shot stopper moved to the 20-time English champions winners in a free transfer from La Liga giants Barcelona in January 2015.

United are in fifth place in the Premier League table and nine points behind leaders Leicester City.