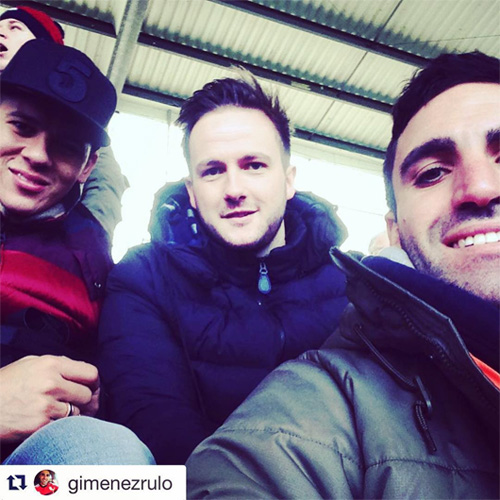 Marcos Rojo will have regretted not staying at home and watching some films on the television on Boxing Day.

The injured Argentine centre-half watched his Manchester United team-mates suffer a resounding 2-0 loss to Stoke City at the Britannia Stadium.

The Red Devils slumped to a fourth successive Premier League loss after goals from Bojan and Marko Arnautovic sealed three points for the Potters.

United defender Rojo reposted the above selfie on his Instagram page after Louis van Gaal’s side dropped to sixth place in the Premier League table.

Rojo’s pal wrote on the photo-sharing app which the defender reposted on his profile: “In the Britannia Stadium making it the stamina to United”

Former Barcelona striker Bojan edged the Potters into an early lead after the pint-sized forward capitalised on a mistake from Memphis Depay.

Stoke playmaker Marko Arnautovic doubled the home side’s advantage with a brilliant second goal before half-time at The Britannia.

Van Gaal’s side have lost their last three Premier League games and United are winless in their last five games in all competitions.