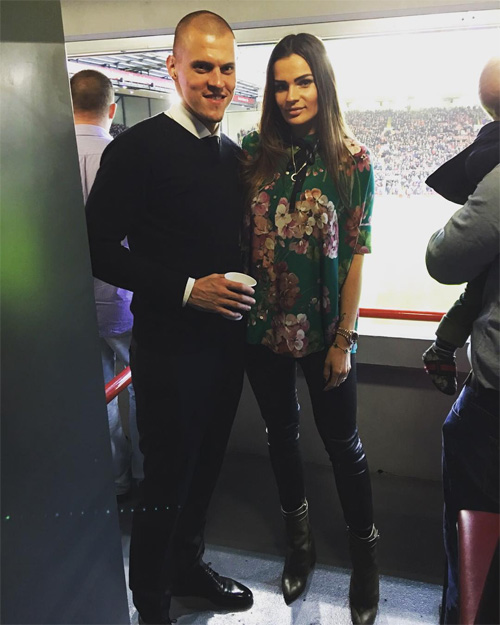 Martin Skrtel joined his wife in the Anfield stands as the injured centre-half watched Liverpool ease to a 1-0 victory over Leicester City on Boxing Day.

The Slovakia international is expected to be sidelined for six weeks after the Liverpool centre-half suffered a hamstring injury during last weekend’s 3-0 loss to Watford.

But the Reds managed to cope in the absence of the 30-year-old thanks to an outstanding performance from Dejan Lovren and Mamadou Sakho against in-form striker Jamie Vardy.

The injured Liverpool defender posted the above snap with his wife at Anfield following the Merseyside outfit’s first win in four Premier League games on Saturday afternoon.

Skrtel has scored one goal in 16 Premier League games for the Merseyside outfit so far this season.

Liverpool moved up to eighth place in the Premier League table following their 1-0 victory over leaders Leicester on Boxing Day.

The Reds travel to Sunderland in their next top-flight game on 30 December.

Jamie Carragher: Why I really want Arsenal to win the title

Photo: Tottenham star Erik Lamela all smiles with his No1 fan