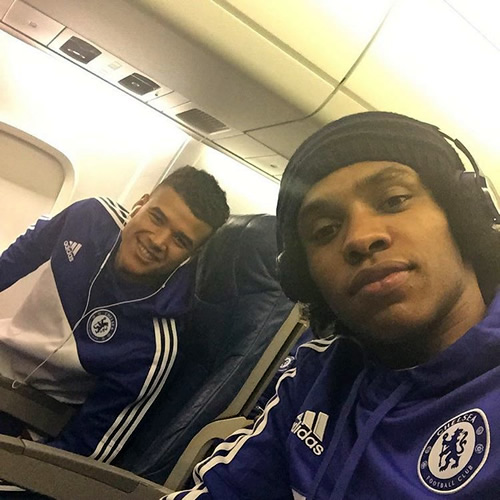 Kenedy looked in good spirits as he squeezed into Willian’s selfie during Chelsea’s flight up north for their Premier League clash with Manchester United on Monday night.

The Blues duo are looking to help the west London side return to winning ways after the disappointment of their 2-2 draw with Watford on Boxing Day, in what was Guus Hiddink’s first game back in charge at Stamford Bridge.

Kenedy, who joined Chelsea during the summer transfer window from Fluminense, has not featured for the west London side since their goalless draw at Tottenham Hotspur at the end of November.

Willian, on the other hand, has been one of the Blues’ standout players this season and notched up an assist during Saturday’s draw with the Hornets.

The Brazilian pair looked in a good mood as Chelsea bid to heap more misery on Louis van Gaal by claiming victory at Old Trafford.

The 27-year-old Willian shared the photo above on his personal Instagram account on Sunday evening and wrote: “Off to Manchester! @kenedy”