Both men were key in Arsenal's 2-0 win over Bournemouth on Monday night... 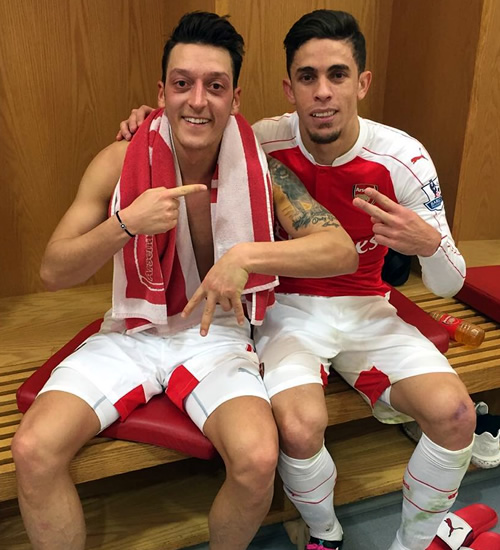 Mesut Ozil and Gabriel Paulista were all smiles after helping to fire Arsenal to the top of the Premier League table with a 2-0 win over Bournemouth on Monday night.

Arsene Wenger’s men went ahead in the 27th minute when Gabriel headed home Ozil’s corner in north London as the Germany playmaker notched up his 16th Premier League assist of the season.

Ozil was in superb form throughout the game, and the World Cup winner made it 2-0 when he exchanged passes with Olivier Giroud and slotted home in the 63rd minute to wrap up victory for the north London side.

The result lifted Arsenal up to the top of the Premier League table ahead of Leicester City’s clash with Manchester City on Tuesday night.

And both Ozil and Gabriel looked to be thrilled to help Arsenal return to winning ways after their 4-0 thrashing at Southampton on Boxing Day.

Gabriel shared the photo above on Instagram and wrote: “Happy to score my first arsenal Goal! many more to come. Thanks to @m10_official assistance #gabrielisagunner #firstgoalfirstplace”

Arsenal’s next game is a home clash with Newcastle on Saturday.