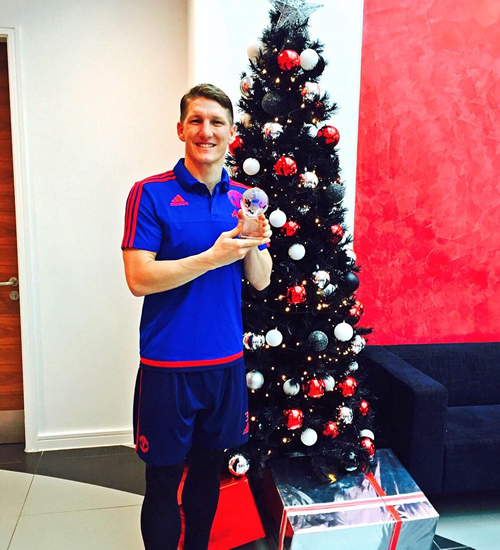 Bastian Schweinsteiger has taken to social media to thank Manchester United fans for voting him the club’s player of the month for November.

The World Cup winner has been a regular fixture in Louis van Gaal’s first team since joining the club from Bayern Munich last summer.

The German midfielder, who is United’s second highest appearance-maker this season, started every game last month and netted his first goal for the club in last weekend’s 1-1 draw at Leicester City.

The goal came after his cross was turned into his own net by Troy Deeney in stoppage time as United earned a 2-1 win at Watford the weekend before.

Schweinsteiger scooped 55 per cent of the votes to beat off competition from Chris Smalling with 30 per cent, and Jesse Lingard on 15 per cent.

The midfielder shared the picture above on his personal Instagram account on Friday afternoon and wrote: “Thank you all for voting me player of the month. Your support means a lot to me! #mufc”

Schweinsteiger will be expecting to feature when United host West Ham United in the Premier League on Saturday afternoon.

Jurgen Klopp: Why this Liverpool star sometimes plays like he’s 18