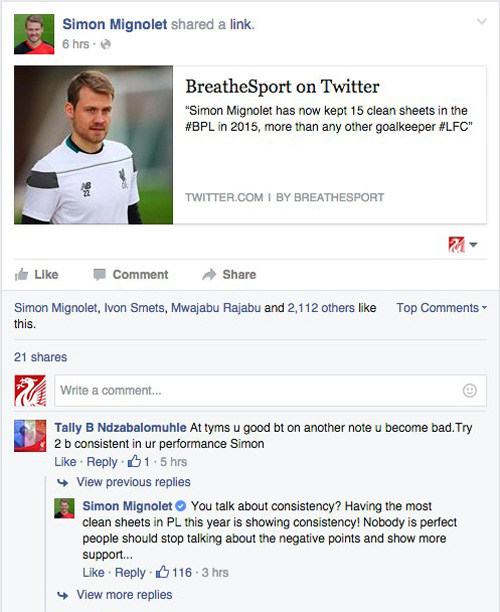 Simon Mignolet has responded to a Liverpool supporter’s criticism of the goalkeeper on his Facebook page ahead of Wednesday’s trip to Sunderland.

The Reds shot stopper linked a BreatheSport post on his Facebook account which highlighted that the Belgium international has kept more clean sheets than any other Premier League goalkeeper in 2015.

However, one Liverpool fan gave a rather cutting assessment of the 27-year—old goalkeeper under the post and criticised Mignolet’s lack of consistency since joining the Reds in 2013.

Facebook user Tally wrote: “At tyms u good bt on another note u become bad. Try 2 b consistent in ur performance Simon”

Apart from the horrifying grammar, Mignolet also took offence to the negative comment and posted the below reply to the Liverpool fan.

Mignolet wrote: “You talk about consistency? Having the most clean sheets in PL this year is showing consistency! Nobody is perfect people should stop talking about negative points and show more support…”

However, Mignolet has since deleted his response from his Facebook page, although the goalkeeper had support from most of his Facebook fans after responding to the critical comment.

The Belgium international returns to his former club Sunderland on Wednesday night in Liverpool’s final game of 2015.