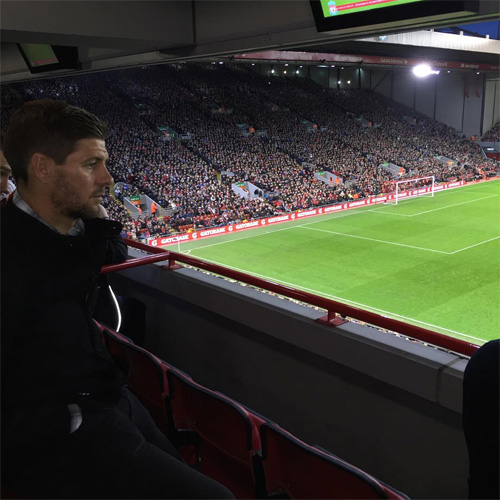 Steven Gerrard was stony-faced as the former Liverpool captain watched the Reds ease to a 1-0 victory over Leicester City at Anfield on Boxing Day.

The Reds started with an unfamiliar centre-half pairing of Dejan Lovren and Mamadou Sakho following injury to first-choice defender Martin Skrtel during their 3-0 loss to Watford last weekend.

However, Lovren and Sakho managed to keep Leicester’s in-form duo Riyad Mahrez and James Vardy quiet as Christian Benteke scored a second-half winner for the Merseyside outfit at Anfield.

But Gerrard looked particularly nervous as the former Liverpool captain watched Jurgen Klopp’s side edge to victory over the surprise Premier League leaders on Merseyside.

Gerrard wrote on his Instagram page: “At Anfield watching the Reds no better backdrop then the Kop! Come on the boys! 👊”

The Reds’s 1-0 victory over Leicester ended a three-game winless run in the English top-flight.

Liverpool are in eighth place in the Premier League table and five points behind fourth-placed Tottenham Hotspur ahead of their clash against Sunderland at Stadium of Light on Wednesday night.