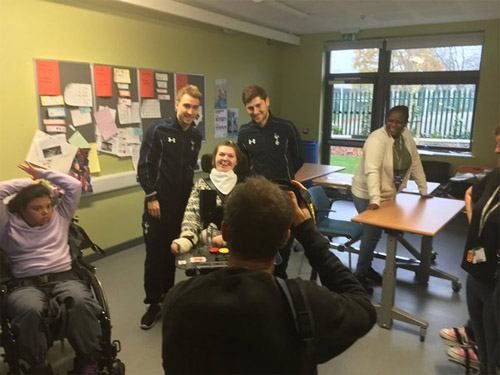 Christian Eriksen and Ben Davies spread some Christmas cheer as the Tottenham Hotspur duo met fans at a London disability centre on Tuesday.

The Denmark international made his 100th appearance for the Lilywhites in their goalless draw with defending champions Chelsea at White Hart Lane on Sunday afternoon.

Davies dropped to the bench after having featured in the Europa League at the expense of England international Danny Rose for the stalemate with Jose Mourinho’s side.

And the Spurs pair did their bit ahead of the festive period as Eriksen and Davies visited Barnet and Southgate’s disability centre, with Kick It Out ambassador Troy Townsend tweeting the above photo.

Both players getting a great welcome from the students @barnetsouthgate pic.twitter.com/JR51O9TytL

Tottenham also posted some photos of the Spurs duo putting smiles on faces on Tuesday.

The Danish midfielder has scored 25 times in 100 games for the north London club since his move to the Premier League outfit.

Eriksen will be hoping to inspire Spurs to victory over West Bromwich Albion in the Premier League at The Hawthorns next Saturday.