Arsenal and Liverpool have failed to capitalise on being top on Christmas Day, but Chelsea have an excellent record 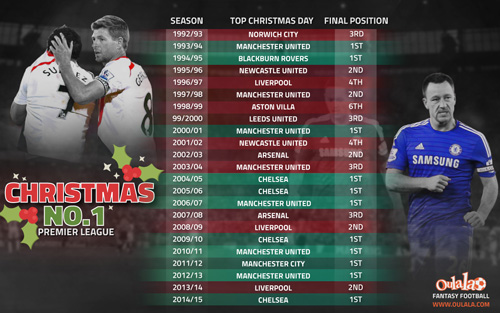 Just how important is it to be the Premier League’s Christmas number one?

Fantasy football game www.oulala.com have looked back at every Premier League season to find out which side was leading on Christmas Day and where they finished at the end of the season.

Oulala’s table shows that last year’s champions Chelsea have the best record when it comes to being top at Christmas. The Blues have led on Christmas Day on each of the four occasions that they have won the Premier League title in 2005, 2006, 2010 and 2015.

However, this season Jose Mourinho’s side will not be repeating that feat.

Both Blackburn Rovers and Manchester City join Chelsea with 100 per cent records in claiming the league title after leading on 25 December in 1994 and 2011 respectively. However, the two sides have only managed it once.

Liverpool have the worst record when leading the Premier League on Christmas Day. On all three occasions that the Reds have topped the table in 1996, 2008 and 2013, they have failed to go on and claim the title.

Arsenal’s record is not much better than Liverpool’s.

The Gunners led the Premier League twice on 25 December in both 2002 and 2007 but failed to capitalise, finishing second and third.

Aston Villa hold the record of the biggest drop from all the Christmas day table-toppers. In 1999, the Villans ended up falling to sixth by the final game of the season.

Overall, less than half of the teams that have led the league table on Christmas day have gone on to collect the title.

In what looks set to be the closest and toughest fought out title race ever, will the Christmas day leaders this season be the same team that lifts the trophy come May?

Sol Campbell predicts where Tottenham will finish this season