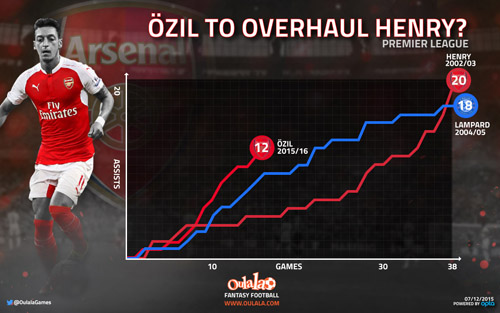 Mesut Ozil has been in fine form this season Photo: www.oulala.com

Mesut Ozil is on course to break the record for the most assists in a Premier League season.

Ozil registered his 12th assist of the season after feeding Joel Campbell for the opening goal in Saturday’s 3-1 victory over Sunderland.

Fantasy football game www.oulala.com have studied how Ozil compares to Thierry Henry during his 20-assist record-breaking season in 2002-03. It appears the 27-year-old is well on his way to smashing the former Arsenal forward’s long-standing record.

After 15 games, Henry had registered just five assists in 2002-03. Ozil is already seven ahead of that figure at the same stage this season. In 2004-05, Frank Lampard registered 18 assists. After 15 games of the season, the former Chelsea midfielder had nine assists.

Ozil is leaving the rest of Europe behind for assists this term. He is four ahead of Raffael of Borussia Monchengladbach who sits on eight, while Bayern Munich’s Douglas Costa and Borussia Dortmund’s Henrikh Mkhitaryan have seven each.

The German has already broken a record held by Cesc Fabregas after assisting in seven consecutive Premier League games. He is now just nine assists away from breaking Henry’s overall record.

Ozil’s form has helped Arsenal to second place in the league despite the Gunners’s extensive injury list. Completing the feat of registering the most assists in one season could guide the Gunners to a long awaited Premier League title.

Could the PFA player of the year award be in motion too? Not bad for a player labelled a flop just 12 months ago.