Mesut Ozil has been on fire this season... 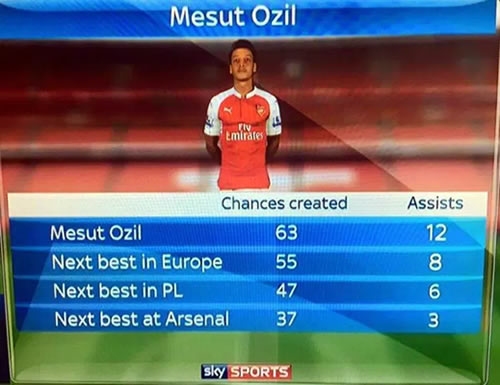 Mesut Ozil has been in top form of late Photo: Sky Sports

Mesut Ozil has been one of Arsenal’s most consistent performers this season to help the Gunners up to second place in the table.

The Germany playmaker notched up his 12th Premier League assist of the campaign on Saturday as Arsenal secured a 3-1 win over Sunderland at Emirates Stadium.

Ozil, 27, set a new record for consecutive assists in the top flight earlier this season.

And the stats above, shown on Sky Sports, show just how good the World Cup winner has been in recent weeks, with the former Real Madrid forward having created more chances and recorded more assists than any other player in Europe.

Ozil will be expecting to feature when Arsenal take on Olympiacos in the Champions League on Wednesday night as they look to book their place in the knockout phase of Europe’s elite club competition.

The Gunners then travel to Aston Villa in their next Premier League game on Sunday afternoon.