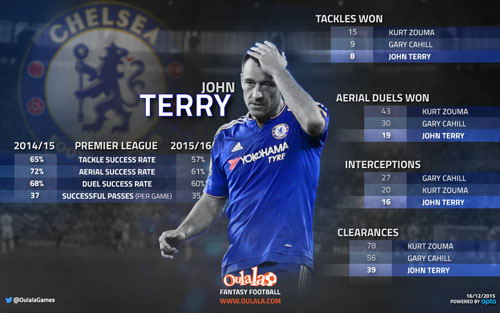 Robbie Savage reignited his war of words with John Terry after the Chelsea captain’s performance in a 2-1 defeat by Leicester City on Monday night.

Savage said: “I’m going to criticise John Terry again because he’s the captain of that team and they looked a better side when he went off.”

Fantasy football game www.oulala.com have analysed Terry’s stats in detail to discover whether the figures back up Savage’s continuing criticism towards the Chelsea man.

Oulala’s analysis has taken a look at Terry’s key stats from this season in contrast to their title-winning campaign and his performance levels this term in comparison to fellow Chelsea centre-backs Gary Cahill and Kurt Zouma.

Terry is under-performing in tackling, aerially, for overall duels and passing this season.

Last term, the 35-year-old won 65 per cent of the tackles that he made. That figure is down to 53 per cent this campaign.

In the air, Terry won 72 per of his battles last season. This term that has dropped significantly to 61 per cent.

His overall duel success-rate is down from 68 per cent to 60 per cent. While for passing, the Chelsea skipper is making two fewer successful passes per game this season than he did last term.

When compared to his team-mates, Cahill and Zouma, Terry has fallen short in four key defensive areas.

Terry has won eight tackles, the fewest of the trio. Zouma has won 43 aerial battles and Cahill has won 30, both more than Terry’s 19.

His colleagues have both registered more interceptions than the 16 that Terry has tallied. While he is also well behind for clearances, making 39 compared to Cahill’s 36 and Zouma’s 78.

With Zouma and Cahill clearly out-performing Terry this season, should Mourinho bench the Blues skipper and instead opt for the more consistent duo at the heart of the Chelsea defence?

Photo: Mesut Ozil sunbathes on a boat ahead of Arsenal v Man City