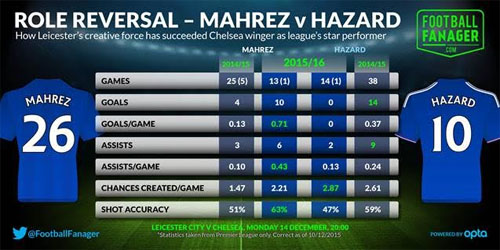 Riyad Mahrez has been red hot this season for league leaders Leicester City.

This infographic from leading fantasy football site Football Fanager shows that he’s even outdoing the form that earned Chelsea star Eden Hazard a PFA Player of the Year award during the last campaign.

Mahrez’s stunning performances have unsurprisingly led to speculation that Manchester United could launch a bid for the playmaker in the January transfer window.

The Algerian hotshot is beating the Belgian for goals per game, assists per game and shot accuracy this season, and is set to better Hazard’s 2014/15 tally of 14 goals.

In fact, Chelsea star Hazard, who moved to Stamford Bridge from Ligue 1 side Lille in 2012, hasn’t score a goal in the Premier League this season after 15 games.
Will the reported United target show the underperforming Chelsea forward who’s boss at the King Power Stadium in their Monday night fixture?