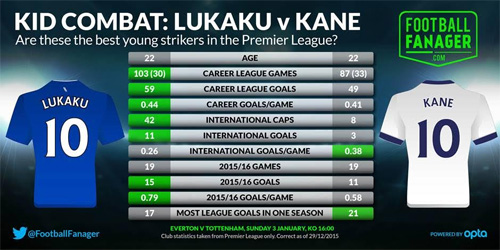 Who comes out on top: Romelu Lukaku or Harry Kane? Photo: Footbal Fanager

The above infographic from leading fantasy football site Football Fanager shows that Everton striker Romelu Lukaku has got the edge on his Tottenham rival Harry Kane ahead of their crunch clash.

The Belgian has bagged more career league and international goals, and also has found the back of the net more this season.

However, Kane scores more regularly and also broke the 20-goal barrier in the league last season – something Lukaku has never done.

But the England international failed to find the net in Tottenham’s 2-1 victory over 10-man Watford at Vicarage Road on Monday evening.

Lukaku and Kane have been prolific during the festive season, but who’ll come out on top this weekend?

Photos: Liverpool’s forgotten defender all smiles ahead of Sunderland clash